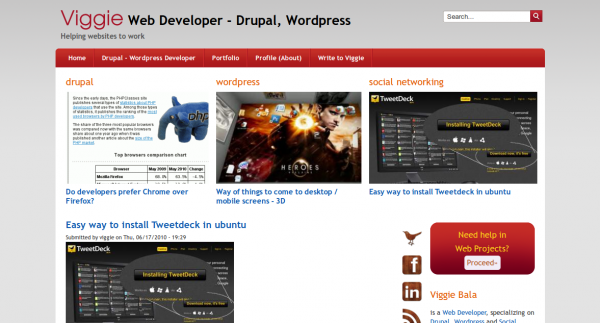 Viggie.com is now re-built from ground up, revamped & re-structured to work effectively. The site still runs in latest version of Drupal 6 (ver.6.22 at the time of this writing). It was actually planned with Drupal7 and made everything in working order in my local server.

However, found only when I update it to site that this web server will not support Drupal7. Drupal7 needs an extension "PHP Data Objects" enabled. (Will write a separate post on this.) As it is hosted in a friend's server who is not ready to upgrade now, I went back to Drupal6 for the time being.

Quest of ready themes in Drupal6

After working for a while in Drupal7, I can really see the effects of 7 in latest version of Drupal6! And the quest for theme begins. I'm a regular with 'Zen' theme & create sub-themes on my own. But with many well-made themes around, especially for simple, blog-like appearance, I wanted to test what others offer. I found 'Adaptive' and 'Fusion' as better core themes to work in terms of developer convenience.

However with the time already spent on developing Drupal7 site for Viggie, I don't want to spend time again creating a custom sub-theme and explored readily available sub-themes which can be easily customized.

I liked 'Sky' theme from screenshots, but alas that screenshot is only for Drupal7. Sky for Drupal6 is a stand-alone theme unlike it's 7 version which is a sub-theme of 'Adaptive' theme. The stand-alone version of 'Sky' is no match for the latest Drupal7 looks. 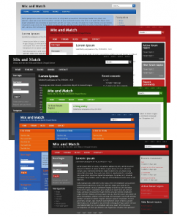 After exploring further, I zeroed in on 'Mix and Match' a Fusion sub-theme. It saved lots of time & helped me to build a theme that looks closer to the look I made for my site in Drupal7. Many thanks to ajross for this theme.

I think I will be using mix and match or Fusion core theme more in future.